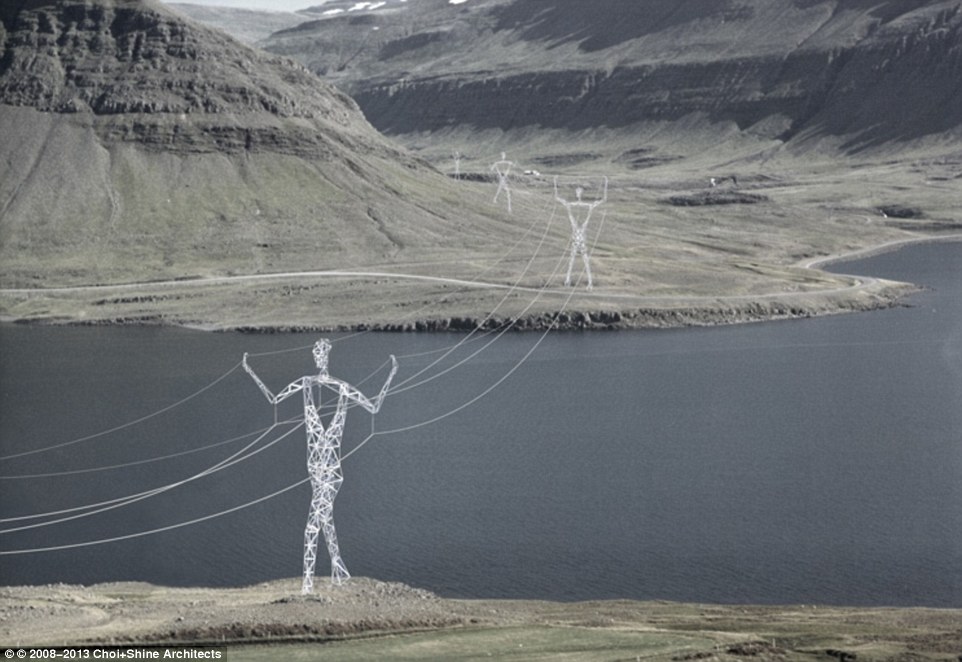 From the mundane to the sublime, these giant humanoid electricity pylons were inspired by the idea of brightening up the ugly utilities which stretch across Iceland’s immense volcanic landscape.
Brought to life by Icelandic architects, the imposing metallic structures can be seen in a series of designs which were submitted to one of the country’s energy companies as part of an ambitious vision to transform the countryside.
The plan was for the pylons to stand around 150ft tall and be constructed from steel, glass and concrete. Each one could then have been molded into various postures to express a mood to fit in with their surroundings.
Choi+Shine, the US architecture practice behind the proposal, wrote of their fascinating plan: ‘Making only minor alterations to well established steel-framed tower design, we have created a series of towers that are powerful, solemn and variable.
‘These iconic pylon-figures will become monuments in the landscape. Seeing the pylon-figures will become an unforgettable experience, elevating the towers to something more than merely a functional design of necessity.’
Ultimately, the company responsible for managing Iceland’s electricity network decided not to take up the proposal when it was pitched to them in 2010 but the originality of the statues was rewarded with a leading architecture award.
More information about the Land of Giants™ proposal can be found at landofgiants.org